VH2O2 comes from a more or less concentrated solution of hydrogen peroxide and water. In the trade, aqueous solutions of H2O2 are to be found ranging from 6% to 35% concentration but this factor alone does not mean a lesser or greater sporicidal effect. Obviously, a process with a greater environmental concentration will contribute to a greater lethality. However, temperature and relative humidity also have an influence. In the case of temperature, the higher the temperature, the greater the lethality, even if this is not such a decisive factor at ambient temperatures. On the other hand, relative humidity is much more variable and its effect is more significant. If we start from a high relative humidity, i.e. from an environment charged with H2O in the gas phase, we will be theoretically worse off because there will be less “free space” to obtain the required H2O2 concentration level. The objective of achieving the maximum concentration with the minimum degree of humidity therefore seems logical. However, it has been proved that equivalent levels of lethality can be obtained with low concentrations of H2O2 and high levels of humidity.

Regarding the sporicidal effect, a higher humidity level can make up for a lesser concentration of H2O2. A point is certainly reached in which the increase in humidity no longer means an improvement, but it is a great improvement not to have to dehumidify and yet achieve the expected effect. You merely have to strike the right balance. Thus, the fairly widespread belief that we can achieve optimum lethality only with a high concentration of H2O2 is not certain. If the aim is to achieve a biocidal effect with a lower concentration, it has to be balanced out with the humidity level.

Micro-condensation and its relationship with the sporicidal effect

Why does humidity have a positive influence on lethality? The answer is to be found in a phenomenon that occurs when we approach saturation point in the atmosphere: micro-condensation. VH2O2 comes from a liquid solution of two components: H2O2 and H2O, which have different physico-chemical properties. The vapour pressure of H2O is almost 100 times greater than H2O2. That means that H2O naturally evaporates more quickly than H2O2. However, H2O2 in the gaseous state is much more unstable than H2O and therefore, VH2O2 will condense before VH2O. That is the reason why it is not correct to define H2O2 vapour as gas.

Correlation between concentration and cycle time

Thus, when VH2O2 is introduced into an area which is at ambient temperature, a point will be reached when a certain amount of condensation will be produced, even though it is not visible to the naked eye. This invisible condensation is referred to as micro-condensation. 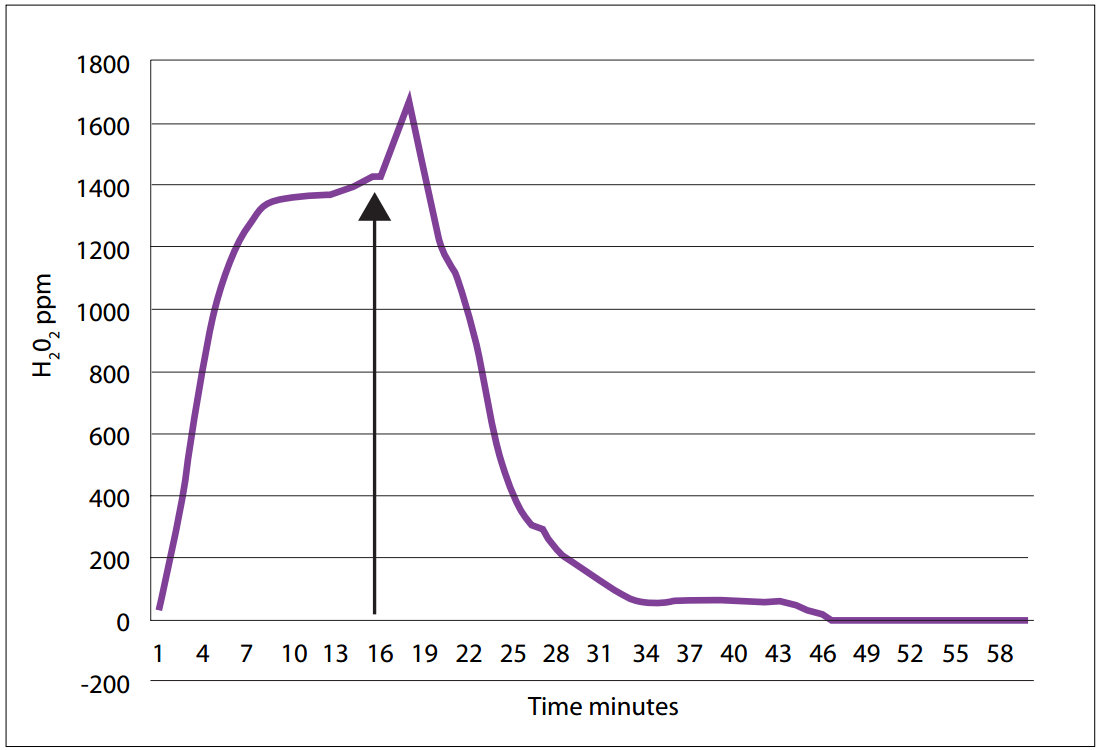 Why does micro-condensation produce a sporicidal action? The lethal effect is explained because this tiny condensation is very rich in H2O2, around 75%. And it occurs precisely because H2O2 condenses before H2O. Furthermore, due to an effect called nucleation, it happens that this condensation occurs primarily on microorganisms or particles, whether they are in suspension or settled on surfaces. In other words, the microorganisms are converted into targets and they remain surrounded by a liquid film with a high H2O2 concentration, and it is precisely this phenomenon which produces the sporicidal action.

Some authors have proposed the acronym MCHP (Micro-Condensed Hydrogen Peroxide) to refer to the real state of the sporicidal agent. They maintain that, in actual fact, vapour acts just as a vehicle to “release” the micro-condensate, which is in itself the real sporicidal agent, because of its high H2O2 concentration.

Nebulisation is an alternative vaporisation method. It consists of injecting the liquid solution through a pipe and mixing it accurately with high-pressure air. When the liquid is expelled, it forms a spray containing a large number of micro-droplets which are dispersed by a kinetic energy effect. These micro-sized droplets range from 5 to 20 µm and an average of 10 µm. The smallest droplets evaporate instantaneously and those not so small move towards faraway places due to their kinetic energy load. These droplets do not moisten and are so light that they float. When they hit a surface, they do not break, they rebound like rubber balls and so they continue to disperse until they evaporate. The non-moistening property is due to the relation between the surface tension of the droplet and its volume.